Another term that's new to me (maybe I should stop saying this, I'm perpetually behind these days): jailbreak as a verb. Of course, we all know that guys in stripy pajamas tunnel out of prison all the time (hey, I watch movies), but this would be a somewhat new usage. Also, it's invariably spelled as oneword.

Jailbreak-the-verb as I recently found it is specific to computers. Here's a definition from YourDictionary.com:

To get out of a restricted mode of operation. For example, jailbreaking may enable content with digital rights to be used on any computer, or it may allow enhanced third-party operating systems or applications to be used on a device.

It's therefore a subspecies of hacking (or cracking, for the more precise). Something interesting to me is that for the moment, and although this term is theoretically generic to computers, it seems to turn up almost exclusively in discussions around the iPhone and his cousins and his sisters and his aunts. Even relatively deep searching into Google still turns up iPhone and iPad references.

It's certainly not an unknown term -- Google get 1.6 million hits. Although I did specify "+computer" as part of the search, I suspect that this includes the traditional use of the term as a noun.

Morphologically, the verb follows normal rules for to break. Thus, the past is jailbroken. It's a transitive verb -- you jailbreak your iPhone, and the iPad was jailbroken.

One reason I am probably not so up on this term is that I don't own any of the devices in the i-Family. It certainly sounds like there's a, um, thriving ecosystem for getting around restrictions in that computer family's design. I expect there's a lesson in there for vendors, but that would not be a topic for this blog. :-)
Posted by WordzGuy at 11:00 AM No comments:

On the tiniest chance that you missed it, surely the word of the week is -- tada! -- Teabonics: creative spellings (as they say) on political signs during rallies. There's a collection on Flickr.
Here's an example: 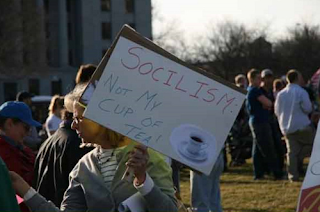 I just find the neologism irresistible. :-)
Posted by WordzGuy at 4:18 PM 1 comment: